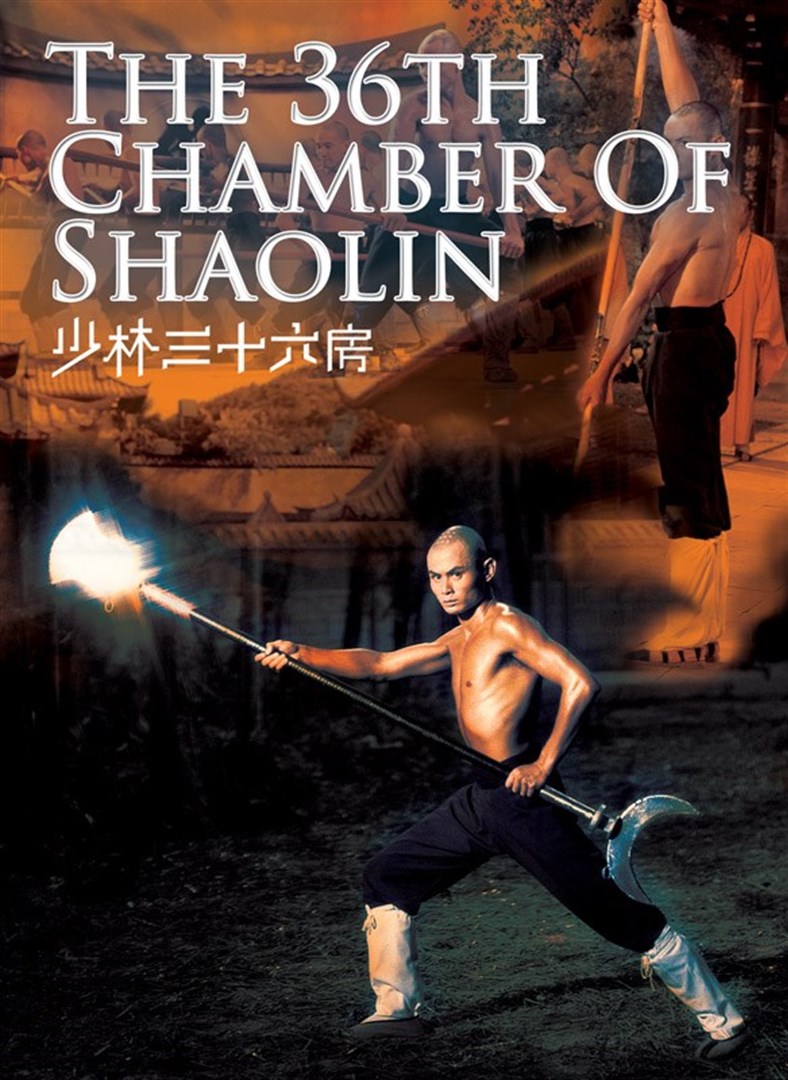 The legendary martial arts director wanted to do the impossible: create a kung-fu filled epic about the making of a Shaolin Temple master — a “love story of the spirit,” as he called it. The result (a.k.a. Master Killer) was Shaws’ number one hit of 1978

A full cast including

The 36th Chamber of Shaolin Trailer

Gordon lou acts as San The a student of one of the local rebellions leaders. San The soon joins the local rebellion against the Manchu government but when the government suppress the rebels and destroy the school, killing friends and family members, San The narrowly escapes. He makes it to the Shaolin temple and asks to be trained in their fighting arts, his request was denied because he is and outsider but is soon accepted by the abbot. His training begins a year latter after learning the daily routine of the monks of daily cleaning and his progress is faster than most monks at the temple.

Although the movie is called The 36th Chamber of Shaolin, there are only 35 chambers and the movie only focuses on 10 of the chambers. Being ambitious San The wants to start at the top at the 35 chamber and quickly realizes that he has no skills to match the energy blow given to him that knocks him of his feet from 10ft away. He then decides to start at the first level. Each chamber focuses on a particular body part or skill, those portrayed in the movie are;

He quickly advances through all 35 chambers of the shaolin temple within 5 years and as one of his final test he has to defeat the Temples expert fighter. who is portrayed the bad boy of kung fu Lee Hoi Shang. After a full year of defeat by the expert monk, San The develops the 3 sectional staff that allows him to defeat the expert and develop the 36th Chamber of shaolin.

The 36th Chamber of Shaolin is developed when the Abbot of the Temple exiles San The from the temple (because it the only way he can leave the temple to start the 36th chamber) and allows him to teach local people about the martial arts of Shaolin to defend themselves against the Manchu government, thus allowing anyone to learn the Martial arts of Shaolin without becoming a monk. San The goes back to his village and quickly dispatches the evil tyrant, portrayed by Lo Lieh, and starts his own school of Shaolin Kung Fu.

The best and potentially the only Shaolin kung fu training movie ever made, others tried to duplicate its attention to detail but none have ever surpassed it.

How are movies rated

The fight scenes were not long drawn out fights, in fact they were straight to the point. Only necessary movements were added to show the fighting skills of the actors and of Shaolin Kung Fu. The movements were fluid and precise with no unnecessary movements. The originality of the fight scenes were unique, but was the training with in the Shaolin temple that took the focus. Never before seen training that would put other movies to shame. The choreography is the typical one two type movements but it is so fluid that it is hardly recognized. Unique movements and techniques were used to shot the training of the body and the strength that can be obtained through constant daily work outs.

This movie did not focus on many characters in fact the only character building was on Gordon lou who portrayed the local who joined the shaolin temple. From the movie we gather that he was a young student that was some how forced to join the local rebellion against the Manchu government. When his friends were killed during a raid he fled to the Temple to learn how to fight. The move shows his character transforming from a weakling into a full fledged shaolin fighting machine with compassion.

the camera views used were not unique but efficient enough to show the techniques during fight scenes and dialog. Full view of the locations and background were visible, there was always something going on in the background so the use of a wide angle shot allowed the viewer to appreciate the full scope of the training. During dialog the character speaking was usually zoomed in to focus attention on them. Other times when the feel of the inviroment was needed a wider angle was used.

The conversations are a classic one, straight to the point. More focus was placed on training techniques and fighting skills than dialogue. The few conversations throughout the movie were to simply keep the viewer up to speed as to what was happening, who the characters were and their relationship to the plot of the move. This movie could be described simply as less talk more action flick.

As with most Shaw brothers movies the bulk of the movie was shot on the Shaw brothers studio lot. However there are some interesting sceens that showed the market place of a small village, a great aerial shot of the Shaolin Temple, along with the inner courts of the Temple and back to the village again. The sets were up to par with other Shaw brothers movies, great backgrounds that add to the time period of the movie while remaining unobtrusive to the film.

The music used throughout the movie again complemented what was going on at that time. If the scene called for dramatic or sad music it was available and added to the emotions conveyed by the actors. There was no theme for any particular character only what was needed to help convey emotions during each scene.

Not much to talk about, the wardrobe was again inline with the era in which the movie takes place, most clothing was robes worn by the monks of Shaolin Temple. The only time that other clothing was seen was during the filming in the village. The villagers wore earth tone clothing so as not to stand out, while the main characters wore clothing that were a bit more fancy to grasp and keep your attention.

Get other movies from the Shaw Brothers collection

Voice your thoughs on the movie

Did you watch this move? what did you think of it?

If you have any additional information you would like to see on this page leave your thoughts here on the guest book.