What is the meaning of Bruce Lee “it hits” 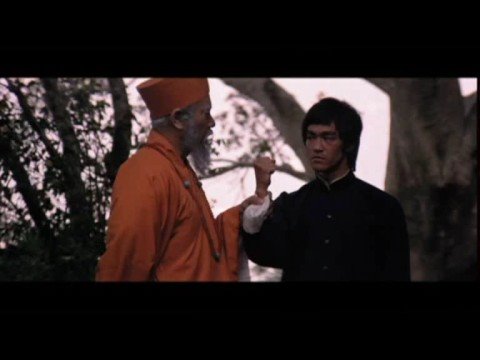 In the opening scene of Enter the Dragon, Bruce lee walks with his teacher as he makes a statement and asks him a few questions. This scene is ultimately one of a few profound discussions held that will help you in your training if you understand what was being said.


Your skills are now at the point of spiritual insight

This statement was a precursor to the rest of the dialogue that was about to unfold. The teachers is merely confirming that he has seen the development of his student and he has reached a level beyond physically fighting. This physical fighting seems to be a weird thing to say since all forms of fighting is technically physical. We inflict pain or have pain inflicted upon us physically by the form of actual physical touch. So what did he mean by this?

There are levels to training in the martial arts and many will never reach this level. In fact many teachers have never reached this level and would not recognize it even if they did. The thing is its a realization that we are not physical beings. Call it what you want, religion, metaphysics or tree loving hippy love modern science had confirmed what the ancients knew to be true all along. We live in a physical body but we are spiritual beings. I’m not going to get in to what the spirit is or what the spiritual world is thats something for a latter discussion for now lets focus on this statement.

By saying he is now at the point of spiritual insight shows that bruce lee has realized this fact and had found a way to take his martial art to another level beyond just action and reaction. If this doesnt make sense to you thats ok as it takes a while to reach the first level of this form of insight and requires a strong mind and body. For now lets just say that his teacher was able to sense with his own spirit that his student is now on a different plane spiritually.

2 – The highest level of Technique.

What is the highest technique you hope to achieve?

This was a quick question to which a quick answer was given. There was no need for explanation as the teacher already agreed that he had a level of fighting beyond the physical. If you are beyond the physical then there is no need to strive for the highest possible technique. When you need to execute a technique it is already there. This is the essence of living on this spiritual plane.

What are your thoughts when facing an opponent?

This is actually two questions in one but bruce answers it with a short example. The questions in play are what are your thoughts and who is your opponent. If you didnt get either part again thats ok. What was meant to show here is that when you are on the spiritual plane things are different. Early on in you training you will figure out that its not your opponent that is your enemy but yourself. Your limitation you mindset, your patience and your confidence will hold you back. If you allow any of them to take over your mind you will never grow as a martial artist. This is important to you development towards the spiritual plane. By defeating yourself first… your negative thoughts about yourself such as I cant kick hard enough, I cant perform a throw, I’m to weak. You run the risk of giving up before you even try hence you fail

I explained why there is no opponent but why did Bruce answer there is no opponent to the follow up question ‘why is that’? Its simple the “The word I does not exist” Not talking in a technical sense about I, he she or it but again when you simply exist in the moment, one with all around you and within you how can the word I – meaning a singular pronoun, used by a speaker in referring to himself or herself exist? Think about it… if you are a spiritual being living in the physical world but connecting with the spiritual world. You find out that all is one and one is all in the spiritual so there is no individuality in the spiritual there is no possession of self as in the physical. Hence the word I does not exist.

A good martial artist does not become tense but ready

As they walk and talk bruce describes or rather gives examples of being in this state of spiritual readiness. He mentions that a fight is like a serious play where the artist becomes totally involved in his role. If you ever acted before then its easier to understand this statement. You already know your lines so you are ready for your que or reaching your mark. It becomes like what I tend to say… Like drinking water. Automatic. The discussion of expansion and contraction is all spiritual. Again in your journey of training there will come a point when you can sense the energy or spiritual aura of others. It feels like how a magnetic field would feel. Expanding and contracting rising and falling. This again is beyond the mere physical.

When there is an opportunity, I do not hit IT hits all by its self” The it that Bruce refereed do was not totally explained but was given the label of a powerful weapon that can be used by the martial artist that deserts his vows. This IT is all that is one seeking expression through the body of the martial artist. Have you ever seen or experienced a point when fighting where it seems things may be moving in slow motion or you have a premonition of what the other person will do next and you are a micro second ahead of them? This is seen alot in toe to toe battles where both opponent seems to be even fighters. Its often the one who either has the most luck or better timing to get in the best hits, or is it the spirit taking over?

Well there you have it. 6 things you missed from the sensei student talk at the opening of Enter the Dragon. What do you think about this assessment? leave your comments below and be respectful we will not tolerate trolls, foul language or defamation of character.